In far too many youth sports in the United States there is an over-emphasis by coaches and leagues on winning games and championships at the cost of really teaching kids the fundamentals of the game. The result? Athletes’ development gets stunted leaving them ill prepared to play at a higher level. Kevin Clark’s fine article on this occurrence in AAU basketball is representative of this problem.

BY KEVIN CLARK
At Thursday’s NBA draft, some of America’s budding basketball superstars will learn where they will launch their careers. Four months later, when the season begins, many will learn something else: They don’t know how to play basketball.

One system that prepares young American players for the pros, the Amateur Athletic Union, is, by most accounts, broken. Without a rigid minor-league system like baseball’s or the extra seasoning football players get in college, America’s basketball gems increasingly get their training from teams affiliated with the Amateur Athletic Union, a vast national youth-basketball circuit that has groomed many of the sport’s top stars. 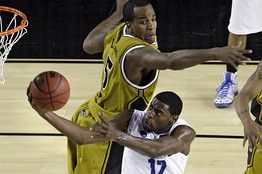 For some time, coaches have grumbled that the AAU’s emphasis on building stars and playing games over practicing produces a lot of talented prospects who have great physical skills but limited knowledge of the fundamentals. Now some players are speaking out.

By the middle of the last NBA season, as concerns build about his dwindling playing time and rough transition to the NBA, last year’s No. 2 overall pick, Michael Beasley of the Miami Heat, finally conceded a fundamental flaw: No one, at any level in his basketball career, had asked him to play defense. And especially not in AAU. “If you’re playing defense in AAU, you don’t need to be playing,” he says. “I’ve honestly never seen anyone play defense in AAU.”

An AAU official declined to comment for this article.

The chorus of critics ranges from AAU player Alex Oriakhi, a McDonald’s All-American center who plans to play for the University of Connecticut, who says shooting guards he’s seen in AAU are in for a “rude awakening” to USA Basketball officials and NBA coaches.

Founded in 1888, the AAU’s first goal was to represent American sports internationally. AAU teams blossomed in many sports, and the organization became a driving force in preparing Olympic athletes. In 1978, the Amateur Sports Act established a governing body for American Olympic sports, usurping the AAU’s role as an Olympic launching pad. Its most notable sport today is basketball, where it counts Magic Johnson, Shaquille O’Neal and LeBron James among its alumni.

In recent years the circuit has gone from a high school diversion—a way to supplement school teams—to a highly organized and often well-funded operation. The non-profit AAU moved its headquarters in 1996 from Indianapolis to Orlando, where it hosts national championships at a palatial Disney World complex.

Shoe companies have sponsored AAU teams as a way to develop early relationships with future superstars. Agents and college coaches have flocked to AAU games, where they can get to know players outside the watchful high-school system. The opportunity to travel across the country and play in front of these kingmakers—often on teams with other top prospects—is something high schools can’t deliver. 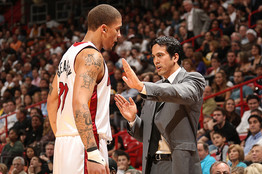 Michael Bealsey of the Miami Heat gets some pointers from his coach, Erik Spoelstra.

The result is a mixture of unrestrained offense and Harlem Globetrotter defense: Even with 32-minute games, far shorter than the NBA’s 48 or NCAA’s 40, top AAU teams often score more than 70 points and sometimes more than 80.

“It’s a bad system for developing players,” says Orlando Magic coach Stan Van Gundy. “They aren’t learning to handle the ball, they aren’t learning to make plays against pressure. The emphasis with our high-school players is to get exposure and play as many games as you can and show everybody how great you are. If I can win the 11-and-12 year old league and tell all my friends about it, that is a whole lot more important than if my kids actually get any better or learn anything about the game.”

In Europe, Mr. Van Gundy says, “those guys are doing five or six practices for every game. They are spending a lot of time in the gym working on individual skills. It’s reversed here.”

New Orleans Hornets forward Peja Stojakovic, who is Serbian, remembers spending four hours a day dribbling through chairs and working on defense and other fundamentals in practices. Mr. Beasley, on the other hand, says he can’t remember any specific defensive drills his AAU teams ran. “If you put structure into AAU,” he says, “no one would play.”

No prospect in this year’s draft knows this better than point guard Brandon Jennings. Last year, Mr. Jennings was one of America’s best high-school point guards and the quintessential product of AAU. Rather than doing a one-year minimum stint in college before entering the NBA draft, he played a season in Italy where, he says, things were different.

His time in Europe began with a rare stretch for an AAU product: He went weeks without touching a basketball. His team spent the preseason running across Roman parks and soccer fields.

In September, they retreated to an Italian mountain hideaway for two weeks and ran there, too. They practiced fundamentals and rarely scrimmaged. Coming from the AAU, this was new for Mr. Jennings, who averaged 5.5 points per game in limited minutes during the in Italy.

Mr. Jennings, who will almost certainly be a first-round pick Thursday, says the experience will give him an edge over other players in the draft.

In a bid to make sure players are more seasoned before they go pro, the NBA, in 2006, began requiring players to be 19 and a year out of high school to enter the draft. While college’s best players often leave after one or two years, four years of college can sometimes help a career: take fundamentally sound North Carolina forward Tyler Hansbrough, who could be a first-round pick Thursday, despite widespread knocks on his athleticism. The league has also built a minor league system, the NBA Development League, though it is only used for high draft picks in extreme cases.

In 2008, the NBA and NCAA also announced a youth initiative, called iHoops, to improve the American structure.

While the U.S. national basketball team redeemed itself with a gold medal in Beijing after a string of embarrassments in international play, Jerry Colangelo, the national director of USA Basketball who is in charge of the Olympic team, says the system is still deeply flawed. He suggests giving high school coaches more access to their players, especially in the summer.

The AAU system has its defenders. New Orleans Hornets guard Chris Paul says that thanks to the AAU, he learned to play the style of the Utah Jazz’s offense when he was 11-years old and credits AAU for starting his development into one of the top point guards in the NBA. He now runs his own AAU team, the CP3 All-Stars in North Carolina.

“Some coaches teach fundamentals, some coaches run and show athleticism. It’s not necessarily a problem because it’s up to you to watch and concentrate,” he says.

Anthony Lewis, an AAU coach from Baltimore who helped develop Rudy Gay of the Memphis Grizzlies, who was the No. 8 draft pick in 2006, says AAU helped teach the skinny 13-year-old not to settle for easy shots.

“We taught him to work away from the bucket,” Mr. Lewis says. “Working on mid-range at a young age, putting the ball on the floor, making him aggressive.”