Billy is uncharacteristically tentative up at the plate. He sets up way too far outside the batter’s box and his weight is always back on his heels. He looks at pitches that, in the past, he would have jumped all over and when he does swing, he’s either too tentative or much too rushed. Those who know him say he looks as though he’s batting scared. He rarely makes good contact these days and when he does, he can barely get the ball out of the infield. Perhaps all this explains why he’s batting a tepid .183!

Last year the kid was an entirely different story. He was a confident and aggressive hitter who used to strike fear into the hearts of the hurlers he faced. He was, what one pitcher who regularly faced him called “a real pain in the butt up there. He’s just an impossible out!” Billy was patient, focused and the kind of hitter who overworked the pitcher. He made you throw to him and if you made a mistake, he always seemed to make you pay for it. Before he got smacked by that pitch during the second game of the playoffs, he was batting close to .430 and leading his team and the league in RBI’s, slugging percentage and extra base hits!

Isn’t it interesting how one errant throw or bad bounce can change everything!
The second playoff game was going extremely well for the high school junior. Billy had gone 3 for 4 in the first game and had already hit a double and knocked in two runs when he stepped up to the plate for his third at-bat. With runners on the corners and a commanding lead, Billy’s team was a lock for the next round of the playoffs. He worked the count to 2 and 0. The third pitch seemed like his kind of pitch, a hard fastball right down the middle of the plate. However, just as Billy turned into it, the ball turned in on him, smashing into the lower knuckles of his right hand and the upper knuckles of his left. Both hands instantly went numb and then began to swell uncontrollably. They sent in a pinch runner for him. As he sat down on the bench icing his hands, the pain just wouldn’t quit. The lower two knuckles of his right hand were interestingly deformed and his left hand was a striking contrast of black and blue.

In between innings Billy tried picking up a bat, but the pain that instantly shot through both hands left him in tears and made it impossible to close his hands around the bat. His trip to the ER confirmed the obvious. He had broken two knuckles of his right hand and badly bruised his left hand. He was out for the rest of the season and he could kiss summer ball goodbye as well.

Being a serious athlete with D-I college scholarship aspirations, Billy did everything he could to help himself heal. He carefully listened to the doctors, didn’t miss a single session of physical therapy and religiously did his rehab exercises. He was determined to come back stronger and better than ever for his senior year. In fact, when early spring rolled around of the next season, he was definitely ready. He had worked himself into great shape. He was physically stronger than he had ever been and his swing in the batting cage felt great. And then the first game came…

Suddenly he was gun shy up at the plate. Inexplicably he had lost his trademark confidence. He was tentative. He was over-thinking and too focused on the pitcher, trying to anticipate what was going to be thrown next. Interesting enough, he knew that he shouldn’t be thinking up at the plate. He knew that he hit his best when he was relaxed, “mindless” and focused only on the ball, one pitch at a time. However, no matter how many times he told himself, “relax” and “don’t think,” he till couldn’t get himself to shut off his mind and get comfortable up at the plate. Somewhere in the back of his head he was distracted by the possibility of getting hit again.

It wasn’t as if this thought was something that he was even conscious of. But somehow, Billy was apprehensive up at the plate and despite how aggressive he might have been before his injury he just couldn’t get himself to respond in that same way anymore. Truth be told, the thought of getting hit was in both the back of his mind as well as in his body or muscle memory, and no amount of cajoling, conscious self-assurance or threats could get it out of there.

Billy, like many ball players was suffering from an RSPPs, a very common performance issue that lays waste to the careers of many talented ball players across all levels of the game. Occasionally an athlete will successfully work through this kind of problem by himself. More often than not, however, these problems will continually sabotage an self-confidence and ultimately drive him right out of the sport.

What causes RSPPs? These repetitive performance problems are most often caused by past physically or emotionally upsetting events. For example, a physical injury like a collision, concussion, torn ligaments, pulled muscle, getting hit by a pitch or breaking a bone, or the upset can be emotional like committing an error that costs your team an important game, choking away a big performance opportunity, getting cut from the team or being screamed at and humiliated by your coach in front of your teammates and fans.

These upsetting events end up getting memorized and held in the athlete’s mind and body, long after the experience has been forgotten. If they’re in any way reminded of these upsets or the athlete is under pressure, then components from the original experience end up bubbling up into awareness. What the athlete becomes aware of at that point is a loss of confidence or feeeling of danger inside. This sense of inner danger then triggers that athlete’s nervous system to automatically respond with self-protective motor programs, i.e. fight/flight. However, when you step up to the plate to hit or onto the mound to pitch, you can’t really fight or flee! When any mammal is experiencing a sense of danger inside and can’t respond with fight or flight, there’s a third, default survival response that kicks in: the FREEZE or IMMOBILITY response. Suddenly the athlete can’t get himself to do what he knows how to do. He loses his velocity on the mound and can’t get the bat off of his shoulders! 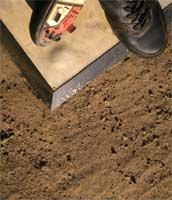 Which brings us back to Billy….

Intellectually Billy knew he was setting up too far outside the batter’s box. He knew he was leaning back on his heels. He knew he shouldn’t be over-focusing on the pitcher and thinking up at the plate. He knew he was supposed to relax and just trust his instincts. And, of course, he knew which pitch was his. Unfortunately, Billy was not able to use what he consciously knew because he was stuck in FREEZE! All he was aware of was that he felt no confidence and couldn’t seem to get the bat off his shoulders!

Working with Billy, I helped him move out of his freeze response so that his trained performance skills came back on line. He reported feeling like his old self, much more comfortable and relaxed up at the plate. Soon he found himself in games setting up inside the batter’s box the way he used to before he had his hand broken. He then went on a 10 game hitting streak in which he batted a ridiculous 23 for 28!