THIS IS A GREAT STORY ABOUT A NINE YEAR OLD WHO WAS SO FED UP WITH PARENTS BEHAVIORS AT HIS HOCKEY GAMES THAT HE TOOK MATTERS INTO HIS OWN HANDS. (ARTICLE AND HIS VIDEO!) 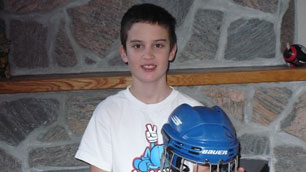 Hockey player Miller Donnelly, 9, was fed up.
He loved the game of hockey, but every time he stepped on the ice, the yelling began.

“It was getting really out of control,” said Miller, now 11, who plays for a peewee AA team in the Copper Cliff Minor Hockey Association in Sudbury, Ont.

“I just wish they’d stop yelling and start cheering. Then we could have a really fun game,” he said.

“It’s certainly a really big problem.… We’re the younger ones and they have to show us some respect.”

Miller wanted to draw attention to the problem. So, in 2006, he wrote a speech for a class assignment pleading with hockey parents to stop being so negative.

It was only intended for his class and a few members of his family, but a YouTube video of Miller giving his speech has recently drawn attention and has now garnered more than 85,000 hits.

His dad, Mike Donnelly, said roughly 50 minor hockey associations across Canada and the United States have also posted his son’s speech on their websites.

Neither he nor his parents ever thought his message or the video would spread the way it has.

Miller’s speech won his class competition, and later, he won the school-wide contest.

His dad wanted to share his son’s work with family members in Nova Scotia, so he videotaped Miller at home reciting the speech and uploaded it to YouTube.

As aunts and uncles checked it out, the number of hits climbed to just below 10 — where it stayed for about two years.

But then, this past fall, someone — they don’t know who — saw that Miller was wearing an Ottawa 67s T-shirt in the video and forwarded the clip to a trainer with the 67s.

From there, the video — and the message — began to spread.

In November, the Ottawa Minor Hockey website posted the video on their website. The number of hits began to climb.

By Jan. 5, Miller did an interview with Northern Life, a Sudbury news website. By then, his speech had racked up roughly 7,000 views.

Since then, it’s skyrocketed even more.

In his videotaped speech, Miller stands in front of a fireplace in his family’s home. He describes his hockey helmet as being “magic” in a negative way. He says before he puts it on, parents treat him nicely — but as soon as he’s wearing it on the ice, they start yelling mean things.

“The message is very sincere, and it didn’t come out of the sky. Obviously, he’s been exposed to [yelling]. When he puts on his helmet, he’s treated differently, so he thought to himself, ‘Why is this?’ I give him credit,” said Ron Didone, treasurer and coach with the Copper Cliff Minor Hockey Association.

‘PARENTS OUT OF CONTROL’

“It’s sad when I see parents out of control. I don’t know if they lose it or what. I’m sure some walk out and say, ‘What the heck was I doing?'” he said.

While Miller seems shy about recounting some of the more hurtful comments he’s received, his dad, Mike, recalls some of the common phrases often hurled from the stands.

“‘Wake up out there!’ ‘Get off the ice if you’re tired!’ ‘Quit being a baby!’ … I’m trying to think of clean things because certainly, you hear swearing,” he said.

As a result of his You Tube message, Miller got to drop the puck at an Ottawa 67s game and to see the Ottawa Senators play. His speech was also played on the big screen at a Sudbury Wolves Ontario Hockey League game.

“Everyone watched when that video played and at the end, half the people gave a standing ovation,” said Miller’s mom, Cori Niemi.

“It’s a good reminder that parents are really spectators, not participants. It’s a reminder for them to enjoy the game and cheer for the players,” he said, noting that as a whole, he has a “great” group of parents but that certain individuals can sometimes be “troublesome.”

Beyond the attention he and his video has received, Miller — who plays on a different team from the one he was with when he first wrote his speech — said what’s most important is that the exposure seems to be making a difference.

“Parents on the hockey team are stopping,” he said. “I’ve really noticed that.… They’re reminding themselves to stop yelling, which is great.”

His dad, Mike, has also seen a difference in the stands.

“If John Doe is a parent on team yelling at his kid, it makes it more comfy to say, ‘John — magic helmet,” and then John Doe realizes he shouldn’t be doing that,” Mike said.

“I can just base it on people I talk to who say to me, ‘I’m learning from this. I’m doing it a lot less and I’m mentioning it to other people,'” he said.